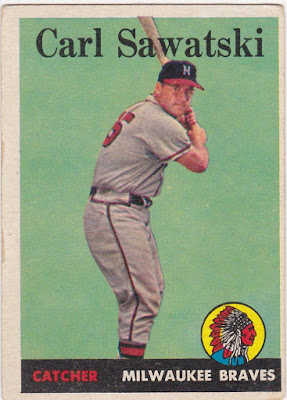 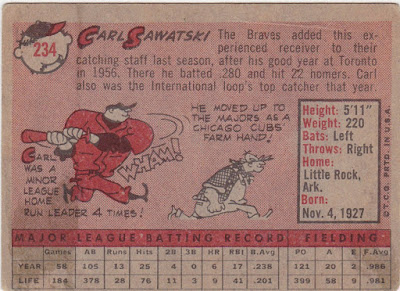 Carl Sawatski played in all or parts of 11 seasons spread over 16 years from 1948 (cup'o'coffee with the Cubs) through 1963. He spent two years in military service and was a feared minor league slugger.

His big league stats never approached his farm system ones but he carved out a nice career as a back-up and platoon catcher for five different clubs. He hit .293 with nine homers and 43 RBI in 1959 for the Phillies. That was probably his best overall season.

In 1958 he was coming off a World Series title with the Braves. He had gotten a couple of at bats in the '57 Series as a pinch hitter. In June of '58, after just a handful of at bats for the Braves he was dealt to the Phillies and split the catching duties with Stan Lopata.

He retired after the 1963 season having finished up with four seasons with the Cardinals. Following his playing days he served as GM of the Arkansas Travelers and president of the Texas League. The MiLB blog has a cool entry on Sawatski including the story of his first stolen base (it came in his last season!).

This is another off-center card that suffers from the '1958 Topps back discoloration' syndrome. Pretty typical of the ones in my binder. The light green is one of the more rare card colors. Add in the Braves old school logo and it's a great '58!
Posted by Commishbob at 11:32 AM