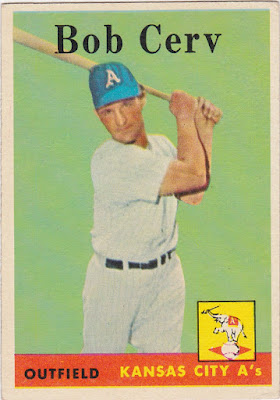 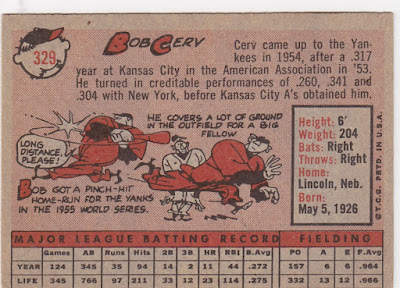 Bob Cerv made three tours of the majors with the Yankees during his 12 year career but his best season (by far) came with the Athletics in the year this card was issued, 1958. Cerv had come up with the Yankees in 1951 after signing out of the University of Nebraska and a brief minor league tuneup. For six seasons he played in a reserve/pinch hitting role and returned to the minors a time or two.

He was traded to KC for the '57 season and got his first shot as a starter. He had a decent season but there was nothing to indicate what was in store for Cerv in 1958. That season, despite playing for months with a jaw wired shut as the result of a home plate collision, Cerv hit 38 homes, drove in 104 runs while hitting .305 with a .592 SLG. He made his only All Star squad that year and batted cleanup for the AL.

He fell off as quickly as he rose and after the '59 season he bounced back to the Yankees and then was drafted by the Angels in the expansion draft of 1961. The Angels traded him back to the Yanks and in 1962 he was sold to the Houston Colt.45s where he played about a month before being released. That was the end of his playing career.

Cerv played in three World Series with the Yanks and won a ring in 1956. There is a funny story concerning Cerv and Casey Stengel that gets retold a lot. It goes like this:


According to sportswriter Robert Creamer, interviewed for the Ken Burns film Baseball, one afternoon, Yankees manager Casey Stengel approached Cerv in the Yankees' dugout, sat down nearby, and commented "There's not many people that know this, but one of us has been traded to Kansas City."

Problem is that Cerv was sold to Kansas City, not traded. And the deal was done a week or so after the 1956 World Series was over. It's pretty unlikely that Cerv and Stengel were on a bench anyplace at that point. But the story does sound like Casey!

Cerv is 91 now and living in Nebraska. There is a nice article about him in an online Saturday Evening Post from 2010. Well worth the read. And the picture of the fateful home plate collision with Tiger catcher Red Wilson is there.

Not many of the light green backgrounds show up in the '58 set. I'm not crazy about them but they are sort of a welcome break from all the yellow ones. Topps used the same color in 1959 and it works better in that set IMHO.
Posted by Commishbob at 12:02 PM