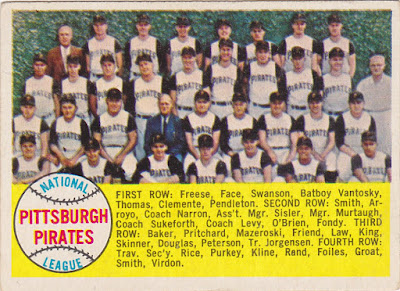 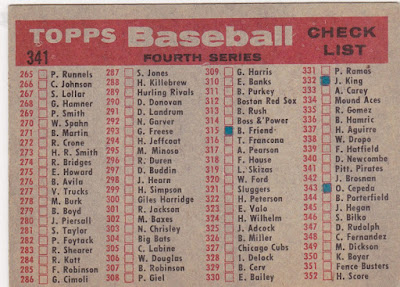 The Pirates finished second in the NL in 1958. Danny Murtaugh was in his first full season as manager having taken over from Bobby Bragan late in the '57 season. Frank Thomas led the team with 35 homers and 109 RBI which was second best in the league in both categories. Bob Skinner's .321 batting average was tops on the team.

Bob Friend anchored the rotation. He had a 22-14 season. Elroy Face had 20 saves as the closer in a time when saves were less common. To put it in perspective only one other National Leaguer, the Dodger's Clem Labine (14 saves) had more than 11.

Roberto Clemente was 23 years old and just coming into his own. He hit .289 and that was the last time he hit under .290 in his career. He's in the team photo on this card, second from the right in the front row.

The Pirates lined up for their team photo (probably late in 1957) in front of the ivy covered outfield wall of Forbes Field. I tend to forget that Wrigley was  not the only park in the majors with that feature.

The checklist on the back is only marked a couple of times. This is one of the last cards I acquired for this set. I had scratched it off my wantlist by mistake and it wasn't until I was putting the binder together that I figured that out.

I had family living in West Mifflin in western PA in the 60's but I never got to visit them or go with them to Forbes Field. I sure wish I had seen it in person. 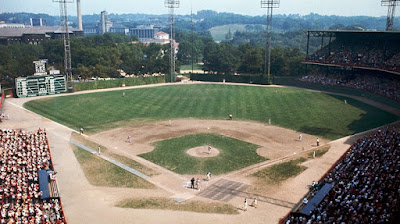