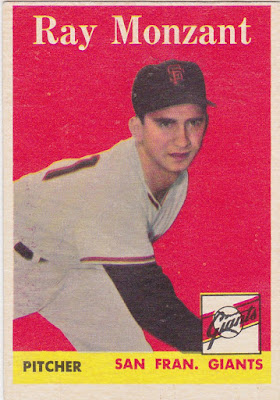 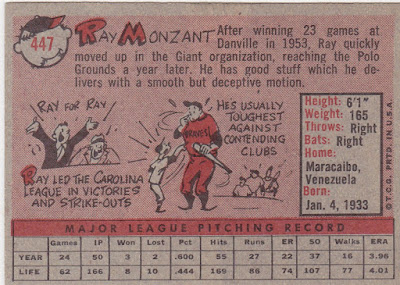 Ray Monzant was the second Venezuelan pitcher in major leagues when he debuted with the '54 Giants. He made seven July relief appearances that year coming off his MVP season in the Carolina League when he won 23 games. He bounced back and forth between the big club and the minors for a couple of years before he stuck in 1957.

Of his 106 games with the Giants 32 were starts and exactly half of those came in '58. That year he was 8-11 in a spot starting role. Unfortunately he also hurt his arm and missed the '59 season. He pitched in the minors (with one San Francisco appearance) in 1960 but was forced to retire due to his arm problems.

It's a colorful card with a posed action shot and nice corners. And Monzant's name on the back is done in yet another different font/style combo.
Posted by Commishbob at 8:46 AM