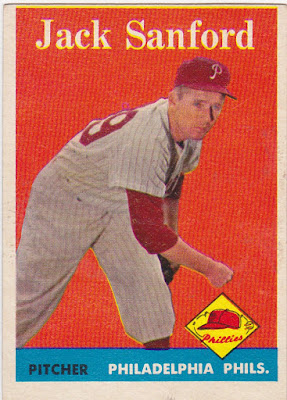 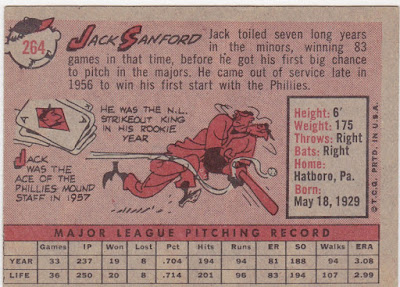 Jack Sanford was coming off a terrific rookie season when this card was being pulled from packs. As a 27 year old in 1957 he went 19-8 for a Phils club that played exactly .500  baseball. He led the league with 188 K's (and 12 WP, not the last time that would happen). He made the All Star squad and grabbed R-O-Y honors.

He had been a rookie but he was no kid. He'd pitched for seven seasons in the Phils' chain and done a military service hitch. His numbers fell off in 1958 and the Phils traded him to the Giants for Ruben Gomez and Valmy Thomas. He had an solid career in San Francisco and helped them win the 1962 pennant winning 24 games. He pitched three games in the World Series that year going 1-2 but his work exceeded that W/L record. He pitched a shutout in Game Two over the potent Yankees and pitched well in the deciding seventh game as well.

As always SABR has a really well done bio posted for Sanford. A lengthy but worthwhile read.

I like the red/blue combo Topps used. It shows off the Phillies' logo well. My copy is in pretty good shape. I had to re-scan it a few times while making calibration adjustments because the orange-ish tone to the red background  keeps looking 'mottled'. I never did get it to reflect how the card looks in hand.

Posted by Commishbob at 5:30 AM