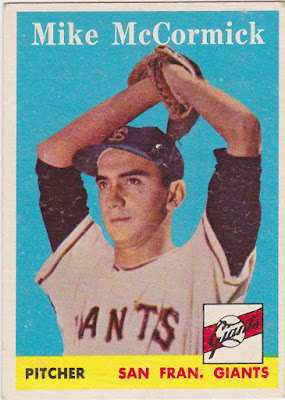 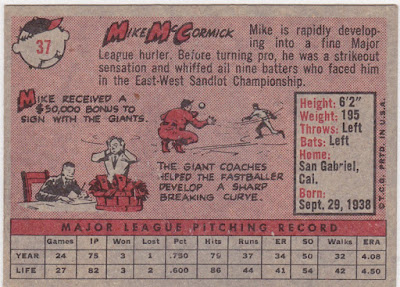 Does he look familiar? He should if you looked at yesterday's posted player. This is indeed Ray Monzant and NOT Mike McCormick. Topps got the photo wrong. As Joe Shlabotnik pointed out in a comment on the Monzant post Baseball Reference's Wiki page says the two looked very much alike. You be the judge: 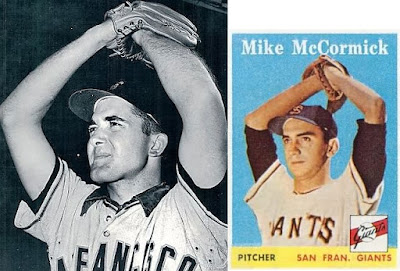 In both of these that's McCormick on the left. 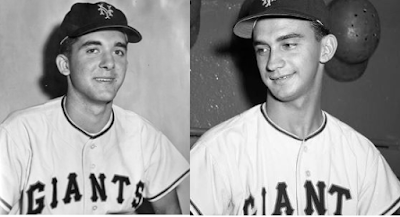 I can see it. I suppose I can even forgive Topps the fact that Monzant threw right handed while McCormick was a lefty.

Anyway Mike McCormick had a 16 year career that began as a 'bonus baby' signee of the Giants in 1956. That meant that he mostly kept a bullpen chair occupied that season. He got into 24 games in '57 and his career was off and running. He had double digit wins for four straight years but was hampered by arm problems in 1962.

He saw limited action that year and was not involved in the '62 Series against the Yankees. The Orioles traded for him but in two seasons there and two more with the Senators he never could shake his problems. The Giants gambled and won big by trading for him in 1967. He won 23 games and the Cy Young Award.

McCormick pitched through 1971 in the majors without ever duplicating the success he had in 1967. He spent two seasons in the minors at the end of his career but that didn't lead to a big league job.

In 1958 McCormick established himself in the Giants' rotation with 28 starts. He went 11-8 but his other numbers don't reflect an above .500 pitcher. He had a 4.59 ERA and a WHIP that topped 1.40 but two seasons later he was the league's best starter.

Nothing special about the card other than the obvious, the uncorrected error. So to give McCormick his due I'll post my favorite card of his (by far), the 1965 Topps. 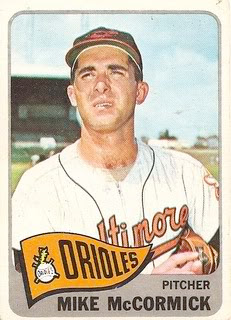 Posted by Commishbob at 7:58 AM