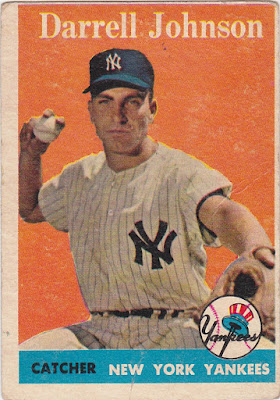 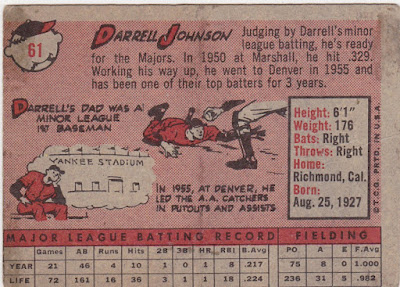 Darrell Johnson was a baseball 'lifer' who spent parts of six seasons as a backup catcher for six different teams from 1952 through 1962. He never got more than 115 at bats (he did that twice) and had a couple of career homers. He spent the 1958 season with the Yankees but only appeared in five games.

That '58 Yankee club won the World Series but Johnson didn't play. He did appear for the Reds in the 1962 Series and collect two hits in four at bats. He coached and managed in the minors after his playing days and then managed the Red Sox, Mariners and Rangers. He won the AL Pennant in 1875 at the helm of the Red Sox and was named Manager of the Year. He continued in the game as a scout for many years. His story is a very interesting one and his lengthy SABR bio is worth a look.

This is a rather flawed card but nothing about it screams 'upgrade'. My original large lot purchase contained only a couple of Yankees. This is one of them.
Posted by Commishbob at 10:07 PM