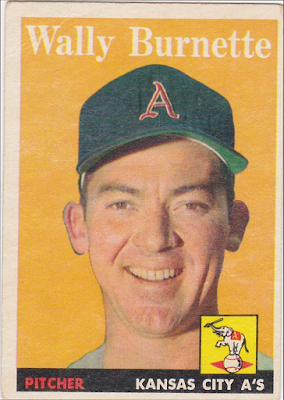 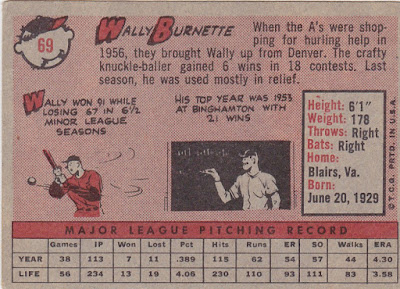 Knuckleballer Wally Burnette pitched in 68 games for the Athletics over three seasons, 1956 thru 1958. He had been in the Yankees' minor league system (and had some outstanding seasons there) before being dealt to the A's for Tommy Lasorda. He shut out the Washington Senators, 8-0, at Griffith Stadium in his big league debut.

In late June of 1958 he was sent to the minors after a rough month on the mound and he never returned to the majors. His career stats show a 14-21 record with a respectable ERA of 3.56 and a 1.35 WHIP. He owned and operated a grocery in his hometown in Virginia after he retired.

Very typical 1958 Topps card. Head shot with what appears to be an airbrushed logo on the cap. Not in the best shape (I have a bunch with that same corner crease) but not one I'll be interested in upgrading.

Posted by Commishbob at 9:34 AM