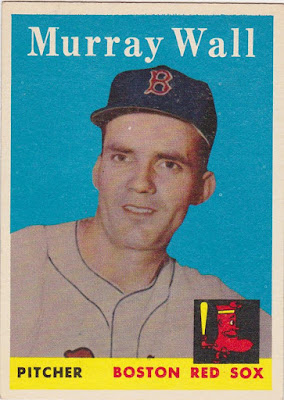 Signed in 1950 out of the University of Texas by the Boston Braves, Murray Wall got a sip of coffee (one four inning appearance) in the big leagues that year. He then spent eight seasons in the minors. The Braves dealt him to the Giants in 1956 but he was still a couple of years away from getting a big league shot.

The Red Sox purchased his rights in August of '57 and he spent the rest of that season and all of '58 with them. In 1958 Wall was the Red Sox' busiest reliever and garnered 9 saves, second on the club. He went 8-9 pitching 114 innings, the most of his career.

Then he had an odd 1959 year. In June the Sox traded him to the Senators as part of a four player deal but three days later he was returned to the Red Sox. Dick Hyde, one of the players acquired by the Sox in the deal was discovered to have a sore arm, so that part of the trade was voided.

After his '59 season he spent a few more in the minors and then retired to work in banking. He died, by his own hand, at the age of 45.

Topps didn't have a huge window to take Wall's photo in Red Sox garb as he came over from the Giants late in the '57 season. Either they nabbed this pic of him after the trade or re-worked an older shot of him. The 'B' on his cap looks legit but the piping on his jersey seems 'off'. 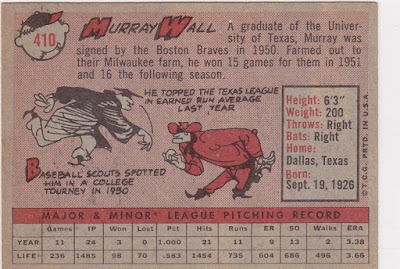 The scan below is the card I received in my original large lot purchase of 1958s. It looks even worse 'in hand'. I'm obviously OK with ungraded, well-loved examples of vintage cards in my set collections but even I have standards. 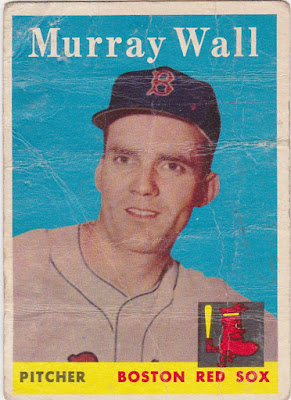