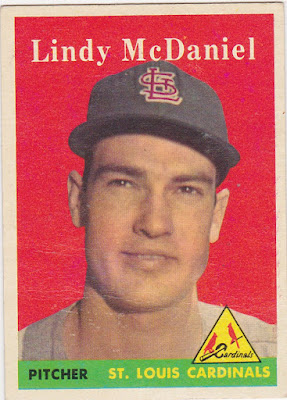 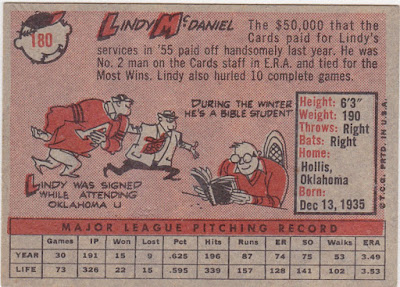 Lindy McDaniel enjoyed a long and very successful career as a big league pitcher. He broke in with the Cardinals in 1955 and retired 21 years later. Along the way he spent a couple of seasons in the Cardinals rotation, led the NL in saves three times, made a couple of All Star squads and finished fifth in the 1960 MVP balloting while landing third in the Cy Young vote. He also holds the distinction of having pitched the most games without a post-season appearance of any player in history (987, nearly 200 more than the second guy on the list).

Lindy pitched for the Cards for eight years before moving on to the Cubs, Giants, Yankees and finally the Royals. His only minor league experience came during the year this card was produced. He had established himself with 15 wins in 1957 but 1958 was disastrous and he was relegated to the bullpen before being farmed out for 6 weeks of so late in the year. He bounced back in '59 and his 1960 season, as noted above, was outstanding.

The back of this card sings McDaniel's praises and he appeared poised for another big year but his final numbers for the '58 season were among the worst of his career. Those are a couple of outstanding cartoons though.

I've collected most if not all of McDaniel's Topps cards. He's been a favorite of mine for a long time. I've related several times the two 1970 games in which he participated that are among my most memorable ever. I wrote to him a few years ago and asked him about both games. Here is the letter with his responses:

He also sent along several of his own signed items with the cards I sent. He remains a good TTM signer and accepts donations to his Christian ministry.

Finally, a few tidbits about Lindy McDaniel. He had two brothers who played pro baseball. One of them, Von McDaniel, has a card in this 1958 set. His cousin is longtime University of Texas football coach Darrell Royal. He homered for the Yankees in 1972 and that's the last home run hit by a Yankee pitcher. When he retired in 1975 his 987 appearances was second all time only to Hoyt Wilhelm. He's since been bypassed in that category by many others and currently ranks 17th. (Wilhelm is now 6th).
Posted by Commishbob at 12:23 PM