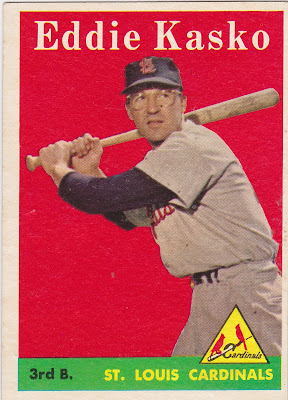 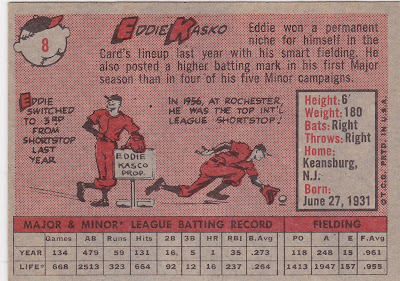 Eddie Kasko spent a lifetime in baseball as a player, manager, scout and team executive. His ten years in the majors came mostly with the Reds but he also played for the Cardinals (as seen on this card), the Colt 45s/Astros and finally the Red Sox. That last season on the field in Boston led to his managing in their chain and then for four seasons in Fenway.

Kasko was originally signed by the Giants and passed through the Browns organization and saw military service before he landed with the Cardinals and made their squad in 1957.

His hitting was nothing special but he had a good glove at both short and third. He also seemed to shine when the spotlight was on. He hit .318 (7 for 22) for the Reds in his only World Series, the '61 five gamer versus New York. And his only All-Star at-bat (in the first of the '61 ASGs) produced a single.

As a manager for the BoSox from 1970 through 1973, he led them to two second- and two third-place finishes. The Sox finish just a half-game behind the Tigers in 1972. Despite his clubs playing 50 games over .500 in his four seasons, he was replaced as manager by  Darrell Johnson in 1974. But he worked for Boston for many years and was eventually selected for induction in their Hall of Fame.

He actually posted on Twitter as recently as 2013. I'd have to believe there can't be many others with cards in this set who have been active on that social media platform.