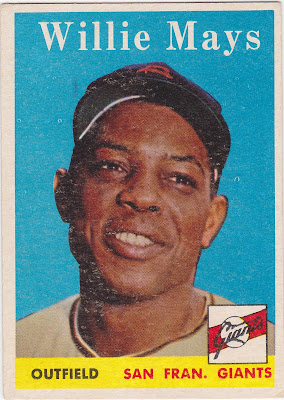 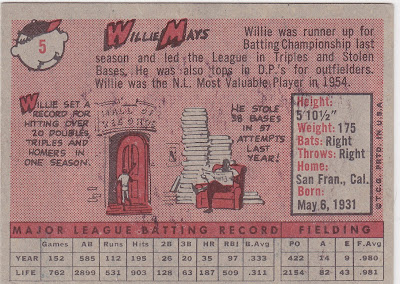 Willie Mays joins Ted Williams in the first five cards in the '58 set. Imagine opening a Series One pack that spring and pulling both of those cards!

My longest lasting memory of Mays comes from the #7 subway ride out to Shea Stadium. Growing up my best friend was a Giants fan, as was his father. I didn't get to nearly as many games in Queens as I did in the Bronx but I saw my share of Mets-Giants confrontations. We always took the subway from Grand Central and for Giants games there was a definite Giants flavor to the crowd. More often than not Mays was the topic of the day. And little wonder.

Most fans, at least older ones like me, have heard the story of Mays as a 20-year-old rookie struggling to adjust to major league pitching after his May 1951 call-up. Legend has it that he went to manager Leo Durocher crying and begging Leo to return him to the minors. Of course, it turned out the Giants' faith in Mays was justified. I'd never thought to do it till now but I looked at Mays' '51 game logs. Willie was hitting .038 on June 1. After the June 17 doubleheader he was at .297 and sailing. He never looked back.

In 1979 Mays was elected to the Hall of Fame by being named on 409 of 432 ballots. Which means 23 baseball writers didn't think Mays warranted their vote. Mull that over. "Vote for a twenty-time All-Star, Rookie of the Year winner and two-time MVP...a guy who at one time or another (multiple times in most) led the league in runs, hits, triples, stolen bases, batting average, OBP, OPS, total bases, and won 12 Gold Gloves? Nah, I'll pass."

This card isn't my favorite Mays card. But it does capture him pretty well I think. Blue backgrounds are nice in this set. A better Mays card? Well, I really like the '64 Topps Giant but my best Mays is one I picked up just a few months ago: 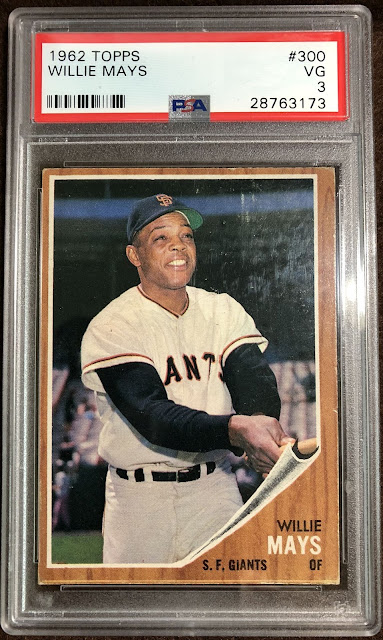 Posted by Commishbob at 6:30 AM