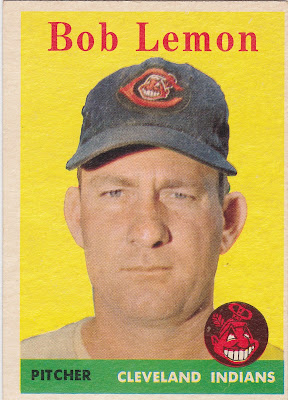 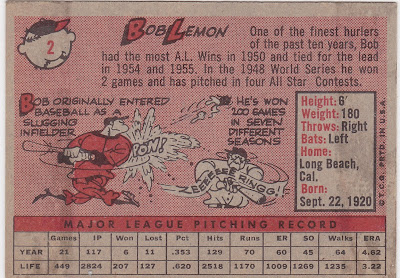 The 1958 set rolled out future Hall of Famers at spots #1 and #2 (and at #5, coming up soon). Bob Lemon was an infielder and outfielder in the Indians chain prior to his Navy service during WWII. He evolved into a successful starting pitcher in the mid-40s and went on to win over 200 games. He helped the Indians win the 1948 World Series with a couple of victories but lost both his games in the '54 Series against the Giants.

He was a seven time 20 game winner and spent his entire big league career in Cleveland. Those Indian clubs he played on had some of the best staffs in the history of the game. They featured, not only Lemon, but Bob Feller, Mike Garcia and Herb Score.

Following his playing career he stayed in the game as a coach, scout and manager. After a nice run skippering in the PCL  he managed the Royals, White Sox and most notably the Yankees with whom he won the 1978 Series. He was inducted into the Hall of Fame in 1976.

The front of this card suffers from the same 'scuffed' look as the Ted Williams. It's one on many in my '58 binder with glue/gum/whatever staining on the reverse.

Posted by Commishbob at 9:47 AM