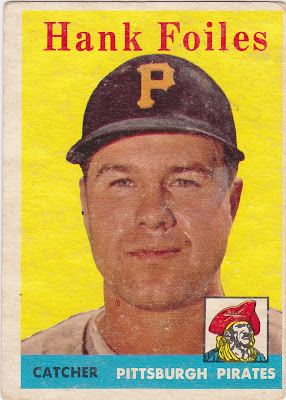 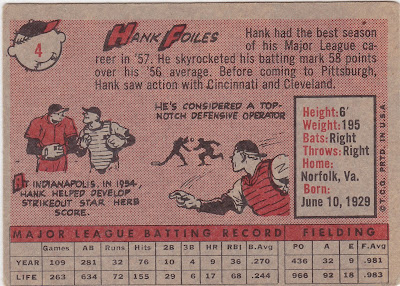 It's becoming apparent that my scanner is none too fond of these '58s. Hank Foiles' card isn't nearly as scuzzy in hand as it appears at the top on this post. Nothing I can do about it though. I'll just endeavor to persevere.

Hank Foiles was a career back-up and platoon catcher who spent eleven seasons in the majors toiling for seven franchises. That's not counting the Yankees who originally signed him in 1947. He was in the Yankees' system for four years before he was drafted away by the Reds in 1951. But he came away with one nice perk of his time with the Yankees...he formed a friendship with Joe DiMaggio that lasted through the years.

He was known for his defensive skills rather than his bat but he made the 1957 All-Star squad as a Pirate by hitting over .300 into July. He had an interesting 1960 season which I will amplify on over on the 1960 set blog when his card comes up. In brief, he was with five different teams (one of them twice!) between December of 1959 and November of 1960.

Foiles wrote a book about his career in 2011 and still makes appearances in the Virginia area it appears. My favorite Foiles card (and for a guy who hit a career .230 he had quite a few) is his 1959 pink framed gem. 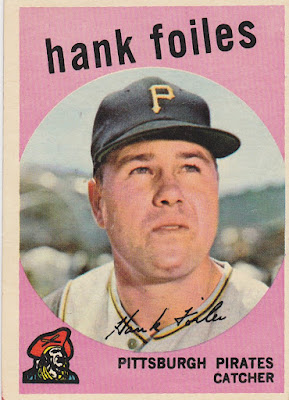 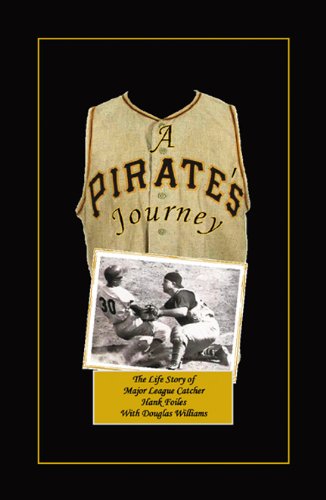 Posted by Commishbob at 2:25 AM