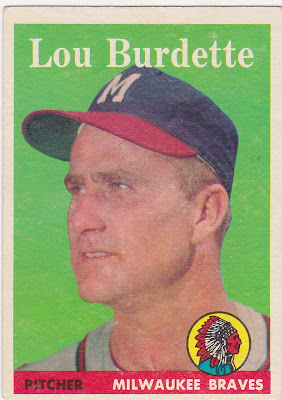 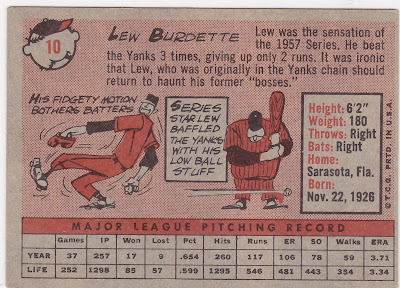 Lew Burdette won over 200 games pitching for 18 seasons with six different clubs. But he was best known as Warren Spahn's mound mate with the Braves in the 50s. He helped them to a couple of World Series appearances and the '57 title. His three WS wins that year (all complete games, two shutouts!) earned him Series MVP honors.

The card companies never seemed to agree on whether his first name was spelled 'Lou' or 'Lew'. Sometimes, as here in '58, they covered their bases by using the two versions on one card. From what I've read Burdette himself switched back and forth as well.  And given his well-known sense of humor, he probably did it with a wink.

Here's a quick look at how Topps (and Bowman as noted) spelled his name on his base cards. Bowman cards either used a facsimile sig or no name on the front.

Post Cereal switched the spelling a few times as well.

Burdette also fancied himself a singer and released a record or two during his career. Here's his best known ("Mary Lou" was his daughter's name):

Here's a newsreel short of the 7th game of the '57 Series. I had to re-run a moment at the 1:14 mark where Yankee pitcher Tommy Byrne tosses the ball from his glove to his hand as he begins his windup. I never have seen that before.


And his famous 'trolling' of the Topps photograper...posing as a lefty: 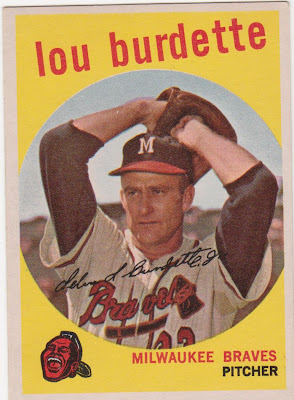