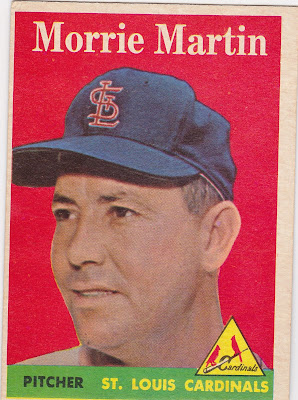 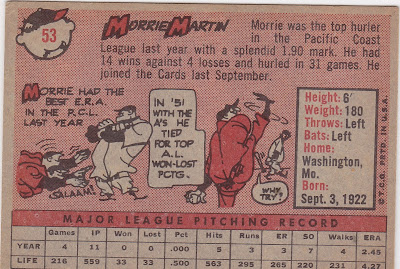 Morrie Martin's baseball numbers are not very impressive..... a 38-34 record with a 4.29 ERA while playing for seven teams in over ten seasons. But Morrie Martin was a combat engineer with the Army's 49th Battalion in World War II. He was hit by enemy fire twice and survived the landing at Normandy. He was awarded two Purple Hearts, four battle stars, and an Oak Leaf Cluster. Those numbers are very impressive. His service had him involved in Operation Torch, Operation Overlord, Operation Cobra, and the Battle of the Bulge.

Martin began with the White Sox organization but through a couple of murky, very 1940-ish transactions ended up with Brooklyn. He was impressive as he moved up through the Dodgers' system in the 40s (when he wasn't fighting Nazis, that is). He twice was a double-digit winner for some lousy Philadelphia Athletics clubs in the early 50s. Then he set out on a trip through the bigs that had him traveling through both leagues as a journeyman reliever until he retired in 1960.