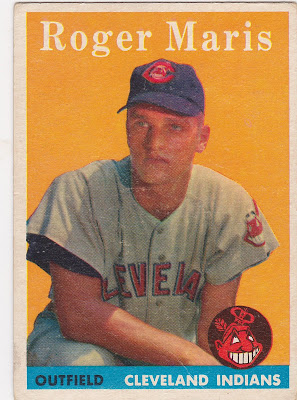 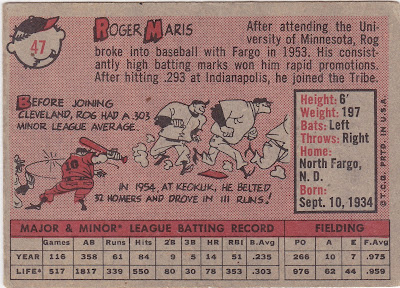 This is Roger Maris' rookie card and it's one of the more costly cards in the set. When I first decided to chase the Topps '58 set I tracked down a copy of this card at a too-good-to-be-true price on eBay. And, as you might have guessed, it was too good to be true. The card I bought was fake. But I learned a valuable lesson...read the whole description. The seller had, in very fine print at the bottom of the description, implied that the card might not be authentic. This copy is legit.

Maris was highly touted and had a minor league career that lived up to the hype. He made the Indians in 1957 and was off to a great start when injuries derailed his season. In 1958 a new regime, led by Frank Lane and Bobby Bragan, took over the Indians and after another injury, Maris' days in Cleveland were numbered.

He was traded to the Athletics in June and played well for KC until the inevitable trade to the Yankees for the 1960 season. Most of the rest is well known...the trials of his '61 homer season, trade to the Cardinals, etc. Here is Baseball Reference's list of Maris' notable achievements:
Looking at the reverse side of the cards shows that Maris is one of the very few players whose name is given a non-italic treatment to go along with the comic-style first letters.

Posted by Commishbob at 3:43 PM