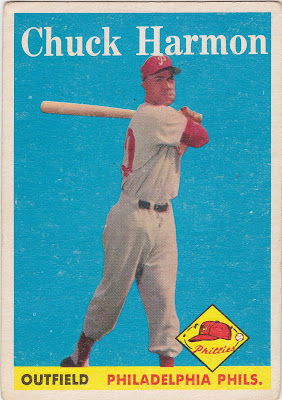 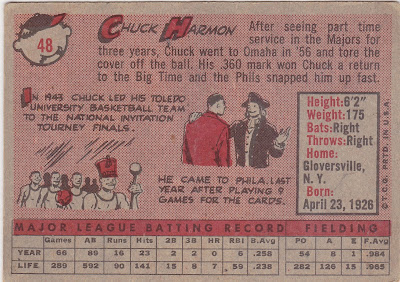 When this card fell out of packs opened in the spring of 1958 Chuck Harmon had already played his last big league game. He had debuted with the Reds in 1954 as that club's first African-American player. In his four seasons in the NL, he hit just .238 but don't sell him short. That record doesn't begin to tell his story.

Harmon, still alive and kicking at 94-years-young as of today, was an Indiana schoolboy hoops champ, twice! And you know how tough Indiana basketball was back then. From there he moved on to the University of Toledo where he led the team to the NIT title game in an era when that tournament was king.

His college career (he also played baseball at Toledo) was interrupted by a three-year active duty stint in the U.S. Navy. After college, he gave hoops another whirl and, after being cut by the newly-integrated NBA Celtics, he led the ABL's Utica franchise to a league title. He served as a player-coach and became the first African-American coach to lead an integrated pro sports team to a championship. Meanwhile, he had played in the St. Louis Browns' minor league chain in the summers of 1947 and 1949.

After a short stay with the Negro League Indianapolis Clowns, he signed with the Reds and spent two minor league seasons working his way to the bigs. His major league career was spent with the Cardinals and Phils as well as the Reds.

He spent four more years in the minors after that final 1957 major league season and then, according to Wikipedia, Harmon worked as a scout with the Cleveland Indians and Atlanta Braves in baseball, and the Indiana Pacers in basketball. Later he worked as an administrative assistant for the Hamilton County Court System in Cincinnati, Ohio. He remains active in SWAP (Seniors With A Purpose) and other youth-related services.

Sounds like a life well-led to me. Here are some links to stories and sites with more info on this rather remarkable, 'under-the-radar,' athlete.

His page at the Negro Leagues eMuseum site

Mr. Harmon and the statue placed in his honor at Cincinnati's MLB Urban Youth Academy

Background info at the Baseball in Wartime site

The Internet Wayback Machine has his personal site archived

And here is a video from a Cincy tv station that profiled him a few years ago:


Update...March 20, 2019. Just a few days have passed since I wrote this and I saw the news that Chuck Harmon has passed away. RIP
Posted by Commishbob at 6:11 PM