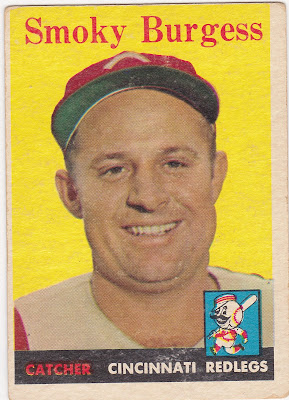 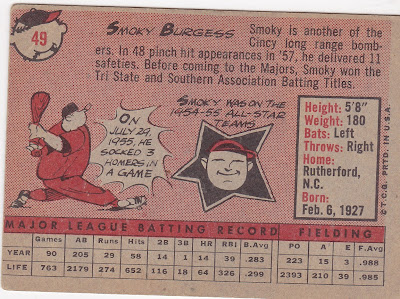 Forrest 'Smoky' Burgess made his name as a pinch-hitter late in his 18-season career. But he was a pretty solid everyday catcher through the 50s and early-60s with the Pirates. He was a six-time All-Star who finished with a .295 career batting average. He played for the Phils, Cubs, Reds, and Pirates in the NL before finishing his career with the White Sox serving primarily as a clutch bat off the bench.

He led NL catchers in fielding percentage three times but, having suffered an arm injury in an accident during his military service, was easy to run on throughout his career. When he retired he was the career pinch-hit leader with 145. His record has since been surpassed by several players.

Smoky played in five games in the 1960 World Series and went 6 for 18. His clutch single in Game Seven preceded Hal Smith's important three-run homer in the 7th off Bobby Shantz.

After he retired he ran a car dealership and then worked for the Braves as a scout and minor league instructor and coach.

The cartoons on the back of the card seem to be pretty close approximations of Smoky himself!

Posted by Commishbob at 9:20 AM