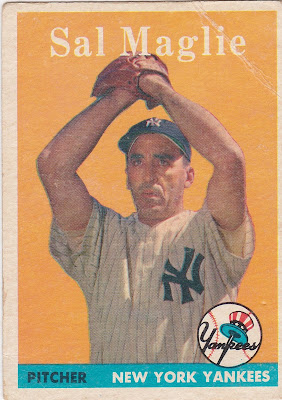 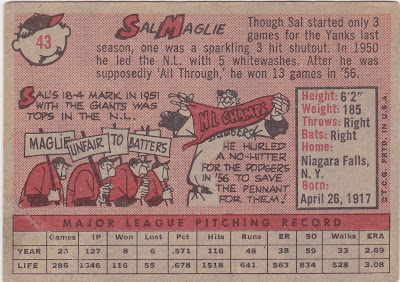 Sal 'The Barber' Maglie who had one of the more fascinating baseball career paths you'll ever come across. He broke in with the Giants in 1945 after having pitched in two other organizations' systems for several years.

He then spent time working in a defense plant after having been turned down by his draft board for medical reasons.  He soon jumped on an opportunity to pitch in Mexico in a fledgling 'major league' there and found himself banned from returning to the majors.

He pitched in Canada in an independent league and then, in 1950 returned to the Giants after his ban was lifted. And it was a very successful return indeed. Maglie went 18-4 with a league-leading 2.71 ERA. He followed that up with a 23 win season in '51. He made the NL All-Star squads in '51/'52 and won a ring with the '54 Giants.

He later continued his long, strange trip with the Indians, Dodgers, and Yankees before finishing with the Cardinals. His SABR bio has all the glorious details and I can't begin to summarize it all. One highlight is his 1956 season which saw him begin with Cleveland, make two appearances, and then be dealt (for $100!!!) to the Dodgers in May. He went on to win 13 games for The Bums and finished second on both the Cy Young and MVP balloting. His second World Series ring was a nice bonus in a season that began with him buried in the Indians' bullpen and contemplating retirement.

I always have to stop and look a second time at this card since Maglie never says 'Yankees' to me. He only pitched in 13 games for them from late in the 1957 season through a sale to the Cards in June of 1958.

Here is 'The Barber' in a 1957 appearance on the old What's My Line? show.  The panel includes Phil Rizzuto and panel mainstay, Arlene Francis, wearing what appears to be a large empty soup can. She was a Dodger fan and Sal didn't fool her for a second. A great 5-minute watch.


Haven't had an orange card in awhile which reminds me that it was a long time ago that I posted some info on the colors in this great set. If you are interested you can check these links:

Posted by Commishbob at 1:19 PM