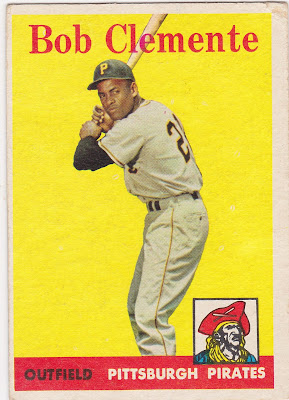 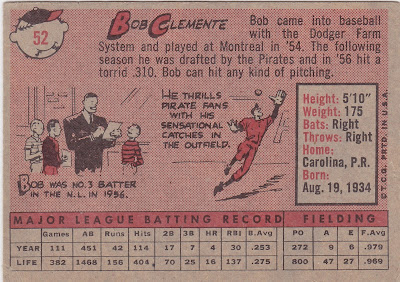 When your nickname is 'The Great One' there isn't much a humble blogger can add. Here is a list of Roberto Clemente's 'Notable Achievements' from his Baseball Reference Bullpen page (which is the grandest one I've come across to date):

That page also had this quote which comes from one of the many bios written about Clemente. I think it says a lot about him....

"When I was a boy, I realized what lovely people my mother and father were. I was treated real good. I learned the right way to live. I never heard any hate in my house. Not for anybody. I never heard my mother say a bad word to my father, or my father to my mother."  "During the war, when food was hard to get, my parents fed their children first and they ate what was left. They always thought of us.”  “My mother have to really work. My mother used to get up at one o’clock in the morning. She had to work and make lunches for these people that used to work in the sugar cane plantations. Now, my mother never went to a show. My mother, she didn’t know how to dance." "But even the way we used to live, we were happy. We would sit down to eat and make jokes and talk and eat whatever there was. That was something wonderful... to grow up with people who had to struggle to eat.”

Posted by Commishbob at 8:03 PM