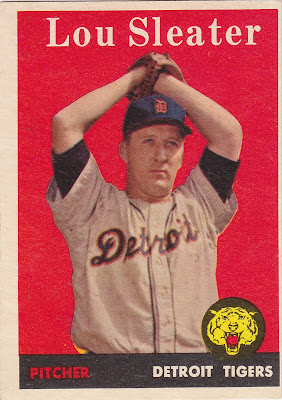 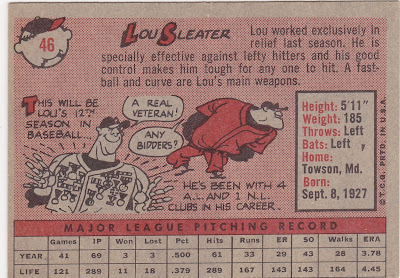 It's kind of cool that lefty hurler Lou Sleater's life paralleled his career. He was born in St Louis and made his debut with the Browns but he was raised in Baltimore and finished his career with the Orioles.

Along the way, he pitched for just about every team this side of the House of David. He threw a knuckleball and his biggest claim to fame is probably the fact that he was the guy who stopped Walt Dropo's streak of 12 consecutive hits when he struck out the big first baseman in July of 1952. Here is Sleater's baseball journey, based on the teams and organizations he toiled for:

At one time or another, he was signed, released, traded, waived, purchased and drafted. Overall he pitched for seven seasons and won 12 games. His busiest time was in  '51-'52 when he totaled 19 starts for the Browns and Senators. He wasn't a bad hitter, either. In 1957 he had three homers for the Tigers and hit over .200 for his career.
Posted by Commishbob at 11:58 PM