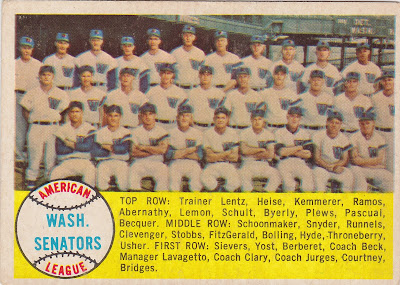 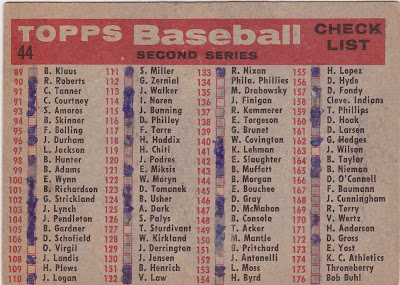 The 1958 Senators finished 8th in the eight-team American League. That certainly wasn't unusual as they hadn't landed better than fifth since WWII.  Just a couple of years away from their move to Minneapolis-St. Paul, the Nats were last in hitting, pitching and fielding among the AL clubs. But they were the youngest club and their nucleus of youngsters included Harmon Killebrew, Bobby Allison, and Camilo Pascual. Those three would later go on to anchor the AL pennant-winning Twins club in 1965.

I'm not really very involved in advanced stats but I found it interesting that the player who had the best WAR on the '58 Nats was reliever Dick Hyde. He went 10-3 with 19 saves (league leader!) to go with a sterling 1.75 and his WAR was second among all AL pitchers. Hyde's season was by far the best of his career.

The card shows a well-checked second series checklist on the back. Mickey Mantle shows up as #150. As anyone that has read my posts knows, I'm OK with marked checklists.
Posted by Commishbob at 8:47 AM