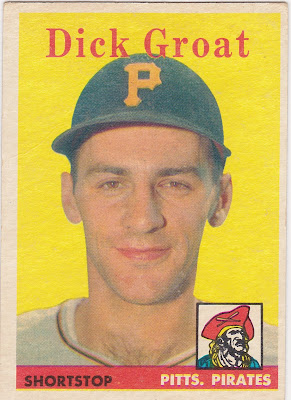 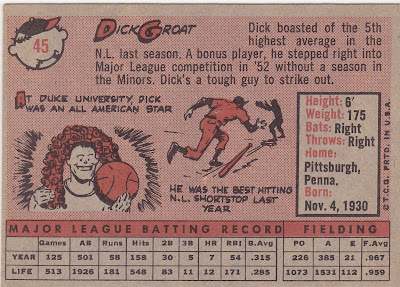 A two-sport star, Dick Groat went from being a hoops sensation at Duke to being a five-time big league All-Star and MVP. After seeing Groat's athletic talent Branch Rickey offered him a contract during his junior year at Duke but Groat wanted to complete his four-year obligation to the Blue Devils. He signed with the Pirates in 1952. He immediately was inserted into the club's lineup at shortstop. He hit .284 in almost 400 at-bats and was third in the Rookie of the Year balloting.

Meanwhile, he was drafted in the first round by the NBA's Fort Wayne Pistons franchise and he played in just under half their games in an unusual situation where the Pistons flew him in for games and then back to Duke where he was finishing up his coursework. He had the second highest PPG on the team but that was the end of his basketball career. He was drafted into the army and after his two years of service, he devoted himself to baseball only.

He was a standout at short for 14 seasons and finished with a .286 career average and World Series rings he won with the Pirates in 1960 and the Cardinals in 1964. He is a member of the College Basketball Hall of Fame. He was part of the Hall's second induction group, the Class of 2007. He went in alongside my man, Guy V. Lewis.

Posted by Commishbob at 5:28 PM