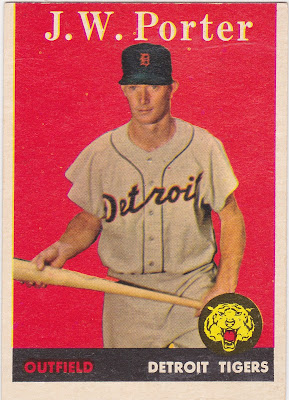 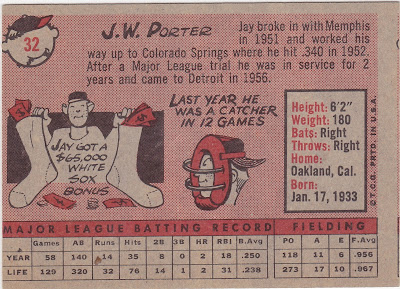 J.W. Porter (the J.W. doesn't stand for anything, btw) had already been traded to Cleveland when this 1st Series card was issued in 1958. Porter was a hotshot baseball prospect who signed a contract with the Browns in 1951. On a side note...the scout that nabbed Porter spotted Frank Robinson in the same games and signed him to a smaller bonus(!).

Porter played for several clubs as a catcher and general utility guy through the 1959 season, never getting more than 140 at-bats. In a way, his career came 'full circle' when he finished it in the same city he had started it in, St. Louis. But his second stint in the Gateway City came with the Cardinals.

After his playing days, he managed in the minors. Here is a great mini-interview, and some cool pics, published in November by a site devoted to catchers.