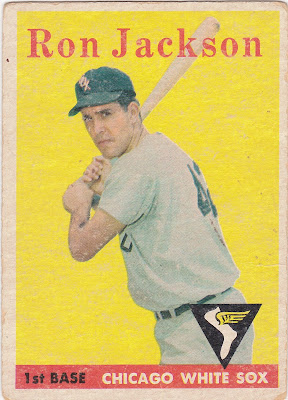 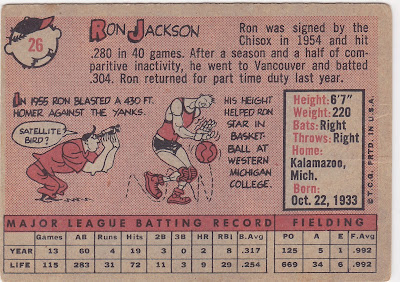 The 6' 7" Michigan native was a dual sport (baseball/basketball) star at Kalamazoo High and later at Western Michigan. He was later inducted into the Halls of Fame of both entities.  He played six seasons for the White Sox as a back-up first baseman behind Walt Dropo and later, Earl Torgeson.

He had originally signed as a 'Bobus baby' which required that the Sox keep him on their roster for a couple of seasons or risk losing him. He managed to get into 40 games in each of those two seasons which is more than a lot of those bonus guys got.

Although he played at the beginning and end of the Sox' title season of 1959 he was not on their World Series roster. He finished his big league career with a short stint in Boston after a trade in the winter of 1960. He played one more season of minor league ball in the Braves' chain before retiring to run an insurance agency in Kalamazoo. He died in 2008.
Posted by Commishbob at 11:27 PM