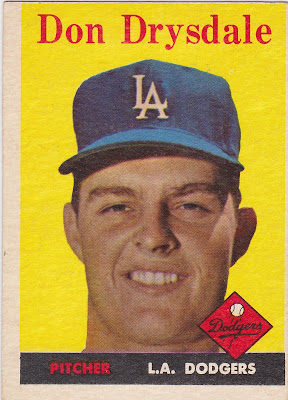 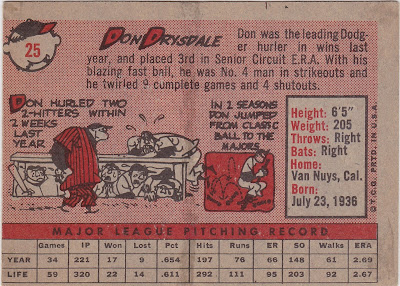 Seems to me that Don Drysdale got a disproportionate number of portrait shots on his Topps cards. Here's another one.

Drysdale, a Hall of Fame pitcher who spent his entire career with the Dodgers, won 209 games and a Cy Young while earning three WS rings in six tries. He had a reputation as a guy who was unafraid to throw inside and was a fine hitting pitcher as well. It was not unusual for him to hit eighth in what was traditionally a light-hitting Dodgers lineup for much of the 60s. Paired with Sandy Koufax they made one of the most dominant 1-2 pitching combos ever.

In 1968, a year 'owned' by pitchers, Drysdale had a streak of six consecutive shutouts and a run of nearly scoreless 59 innings. As an aside (not a judgment), in 2018 no pitcher in either league had more than one shutout or two complete games

He did some television acting while an active player and was a broadcaster after his playing days. He died of a heart attack at the age of 56 in 1993.

Here's a clip of him on the popular Donna Reed show in 1964.