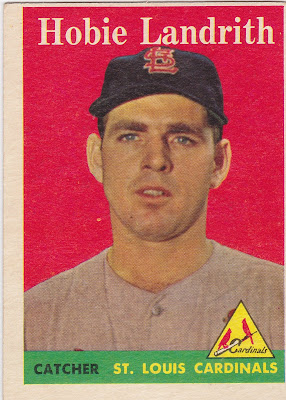 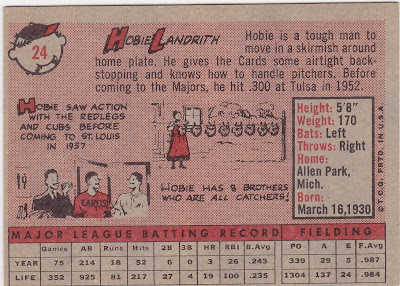 Hobie Landrith caught for seven different clubs over 14 seasons. He was mostly a backup but twice got into over a hundred games in a season. His first major league team was the 1950 Reds but he saw 'big league' action at the age of 15. Here's how he described it in an interview from this baseball history site named "This Great Game":

“When I was 15 years old, a Tiger scout approached me and asked if I would want to come down to Tiger Stadium and catch batting practice while they were trying to get Hank Greenberg into shape...I jumped at the chance.”

After a decade spent with the Reds, Cubs, Cardinals, and Giants, Landreth was the first player taken by the Mets in the 1961 expansion draft. Casey Stengel is supposed to have been asked why he took a catcher and replied: “You gotta have a catcher or you’re gonna have a lot of passed balls.” Despite Casey's 'endorsement' the Mets traded Landrith to the Orioles in June after he'd played just 23 games for them.

Landrith went on to play for the Senators in 1963 before retiring. For his career he hit .233 with 24 homers.

Posted by Commishbob at 5:17 PM