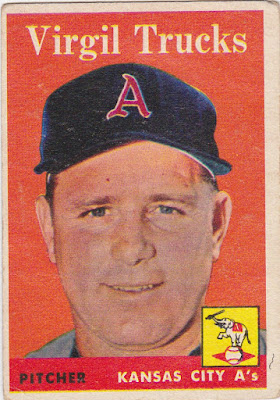 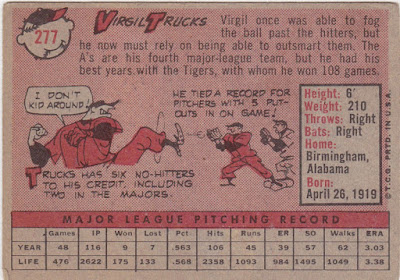 Virgil Trucks pitched for five different AL clubs in a career that spanned two wars. After three years honing his craft in the minors Trucks made a quick appearance with the Detroit Tigers in 1941. He established himself with a combined 30 wins over the '42 & '43 seasons. Then he spent two years in the service on active duty in the Pacific with the Navy.

In 1944 and '45 Trucks pitched for Navy baseball teams alongside big league stars including Phil Rizzuto, Johnny Mize, Dom DiMaggio, Pee Wee Reese and Johnny Vander Meer. His career win total of 177 would have likely topped 200 had he pitched those two years in the bigs.

He was injured and discharged from the service in the summer of '45 and rejoined the Tigers just in time to appear in the 1945 World Series. He made two starts against the Cubs and won Game Two.

Twice an All Star Trucks, in 1952, became the third pitcher to throw two no-hitters in a season. He won 20 games in 1953 with the Browns and White Sox and 19 the following season in Chicago. 1958 was his last big league season and he was clearly hanging on to the game he enjoyed.

The Yankees traded for him that year in a June deal with the Athletics. After an up and down second half of the season he was left off the World Series roster and reduced to a role as batting practice pitcher. In 1959 he was released during Spring Training by the Yanks, pitched some for the Orioles farm club in Miami and then retired. His final card is in the 1959 set.

Posted by Commishbob at 3:50 PM