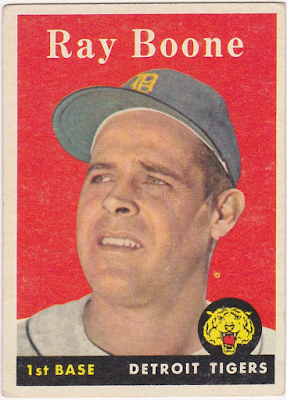 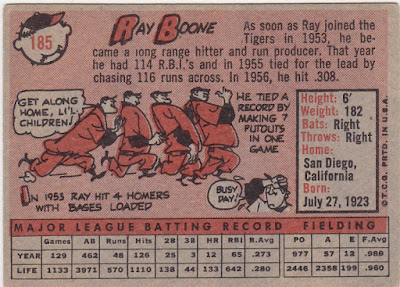 Ray Boone, father of one big leaguer and grandfather of two more, began his pro career in 1942 with a productive season in the Indians' chain. He then spent three years in the military and the same in the minors on his return before getting a shot in Cleveland in 1948.

In June of 1958 Boone was traded by the Detroit Tigers with Bob Shaw to the Chicago White Sox for Bill Fischer and Tito Francona. He was hitting just .237 at that point and the trade to Chicago didn't help improve that much. He finished at .242 with 13 homers. That trade was just the first of three straight 'in-season' deals he was a part of. He bounced to Milwaukee and Boston before retirement after the 1960 season.

This card has a couple of fun cartoons on the back and gets bonus points for the red background. It was part of my original lot purchase. A second copy I bought that looked nice in an eBay picture (better corners, nicer color) turned out not to be in lesser condition so this one remains in the binder.