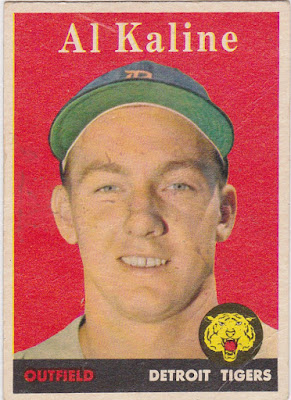 The impossibly youthful-looking Al Kaline was in the fifth full season of his Hall of Fame career in 1958. He was still just 23 years old. Here is the list of career accomplishments found on Kaline's BR Bullpen Wiki page:

And with all that Kaline has always seemingly been a gentleman of the highest order. He won the very first Roberto Clemente Award.

In the year this card was issued Kaline's power production took a slight dip, falling from 23 homers to 18. And his RBIs were down a bit but he hit .313 and made the AL All Star team. He entered the game in left field as a sub for Ted Williams in the ninth inning.

This is a decent card in terms of condition, about average for the star cards I've put together for this set build. Like me and Babe Ruth, Kaline was born in Baltimore. I'm third in that trio when it comes to career numbers. 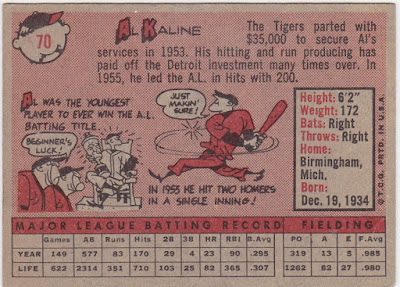 Posted by Commishbob at 7:53 AM