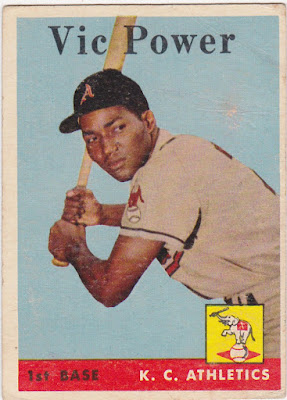 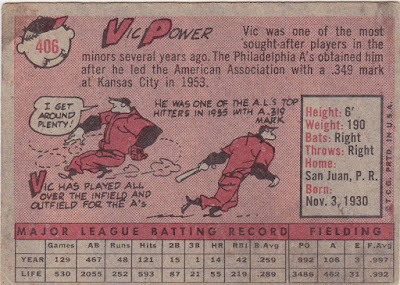 Vic Power was born in Puerto Rico as Victor Felipe Pellot. He won seven Gold Gloves, had four AL All Star appearances and eventually sported one of the best baseball names ever. He came up with the Philadelphia A's in 1954 but he had begun his pro career with in Canada's Provincial League in 1949. He was scouted and signed by the Yankees who dealt him to the A's after a couple of strong seasons in their chain. The reason the Yanks got rid of Power isn't certain but his Wikipedia page states this:


[In 1953] Power led the league with a .349 batting average. However, despite his skills he was not invited to spring training in [1952 or 1953].The Yankees' owners at the time, Del Webb and Dan Topping, felt that Power's playing style and personality wasn't suited for the conservative style that they wanted a "black" player to represent as a member of the club. Power dated light-skinned women, leading George Weiss, the general manager of the Yankees, to say that Power was "not the Yankee type".

Take that for what it's worth. Elston Howard eventually broke the color barrier for the Yankees in 1955. This and much of Power's colorful career is discussed in detail on his SABR bio.

Power played 12 years in the majors, nearly all of that time was in the American League with the Indians, Twins and Angels following his time with the A's. He played very briefly back in Philadelphia in 1964 but that was with the Phils. He retired with a .284 average to go along with 126 homers.

He began the 1958 season with the A's but in mid-June was traded along with Woodie Held to the Indians for Roger Maris, Dick Tomanek and Preston Ward. Hitting .302 and riding a 22 game hitting streak at the time of the trade Power raised his average to .312 by season's end. In checking his game logs on Baseball Reference I noticed that Power and the A's played six doubleheaders in just the first half of June that season. They played on on May 30th as well. That's seven 'twin bills' in a little over two weeks. Power played every inning of all of them. He led the league with 10 triples that season as well.

My lasting memory of Vic Power comes from the early 60s. He was playing first base for the Twins or Angels and the Yankees were hitting in the bottom of the ninth. Mickey Mantle grounded out to end the game but as you watched the screen you expected to see Mantle crossing 1st base. But all you saw was Power making the put out and then looking toward home plate. The Mick had pulled a hamstring or a calf muscle and was in a heap halfway to first. Weird the things you recall from your youth. I have no idea why I know it was Vic Power at first after all these years but I'm dead sure of it.

I really like this card, partially for the all-too-rare light blue color but also because Power was such a fun player to watch in my early years as a fan. It's a bit the worse for wear but not so bad that I feel the need to upgrade it.
Posted by Commishbob at 9:30 AM