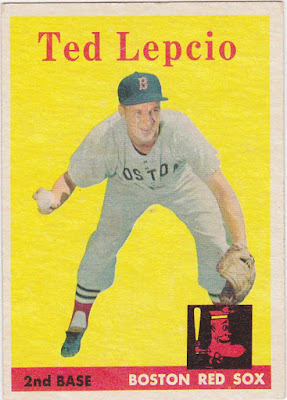 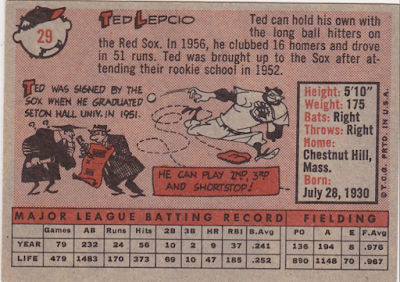 There is more to Ted Lepcio than meets the eye. He was the Opening Day second baseman for the Red Sox in 1952 after just 89 minor league games. His double play partner? Jimmy Piersall.

Lepcio became friends with Ted Williams as a rookie and went on to play as a platoon/utility infielder for seven full seasons with the Sox. He played in 100 games only once, in 1954. He hit .247 with a little pop in his bat (50+ homers) for Boston during his time there. The card highlights his 16 dinger effort in 1956. He was traded to the Tigers in May of '59 and went on to finish his career with stays with the Phils and Twins.

In 1958, his last full season in Fenway, Lepcio played in only 50 games and his average went below the Mendoza line for the first and only time in his career. Both SABR and this Boston baseball history site have  interviews/stories well worth your time.

Lots of yellow cards in this set. This is another one but the 'action' pose breaks up a page full of head shots.

Posted by Commishbob at 9:36 AM