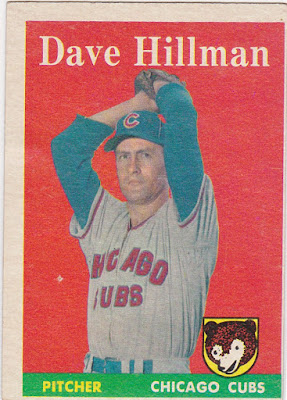 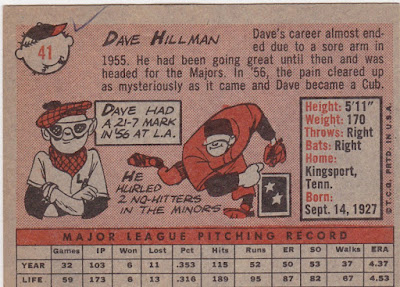 Dave Hillman (given name: Darius Dutton Hillman) worked his way up the Cubs' ladder from 1950 until he broke into the majors in 1955. As the cardback notes he suffered a sore arm but rebounded in 1956 and the next season he had a spot starters job in Wrigley.

After a career high eight wins in 1959 he was traded to Boston where he worked out of the pen for a couple of years with mixed results. In 1962 he was bounced back and forth between the Red Sox and Reds before being dealt to the expansion Mets where he finished out the year (and his career).

Two things I really like about this card...1) the full team name the Cubs wore in that era and 2) the fun 'Hollywood' cartoon on the back.

One thing I don't like...it's miscut bigly. Sad!
Posted by Commishbob at 7:24 AM