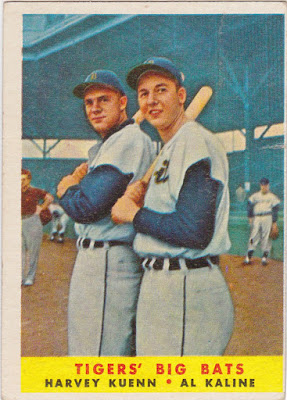 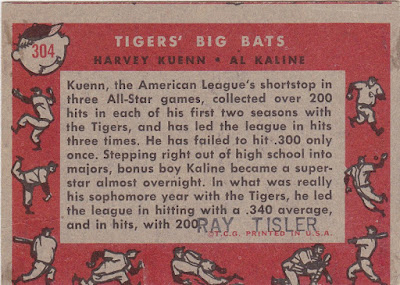 Two of the better hitters in the American League for the decade of the Fifties grace this special. Al Kaline is of course an all-time great.

But Harvey Kuenn is often lost in the conversation but he was an All Star for eight consecutive seasons beginning with his Rookie of the Year 1953 campaign.

I love knowing where card photos were taken but this one had me a bit bewildered. These are Tigers road unis of the era. I knew that the lack of bunting meant it wasn't an All Star game. So I searched through all the vintage shots of AL parks I have saved. The 'windows' looked a bit like those in Fenway but the girders didn't match.

I finally came up with these two pics that I'm sure were from the same photo shoot. Note the fact that Kuenn is wearing a collared jacket under his jersey in all these as well as on the card: 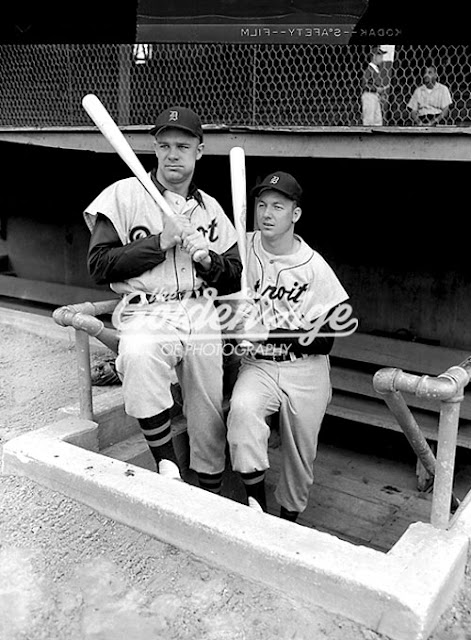 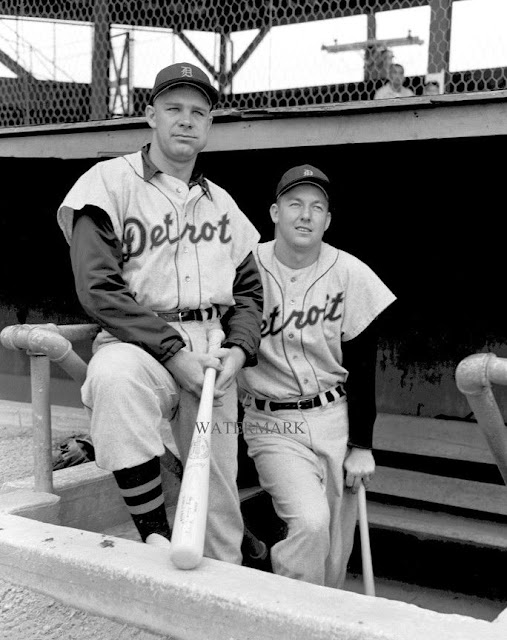 I finally dug around Getty images long enough to find this entry for one of the same shots. If the link doesn't work I'm posting the cut line:

LAKELAND, FL - 1950's: (L to R) Infielder Harvey Kuenn and outfielder Al Kaline, of the Detroit Tigers pose for a portrait in the dugout during Spring Training during the 1950's in Lakeland, Florida. (Photo by: Kidwiler Collection/Diamond Images/Getty Images)

So there ya go. Joker Marchant Field in beautiful Lakeland. It makes sense because the background sort of looks as if it's not a full fledged big league park. Why they are wearing road unis is anyone's guess. I was there a couple of springs ago and thought it was a wonderful old park. I bought the best grilled cheese sandwich I've ever had at a kiosk behind the third base stands. Guy also sold made-from-scratch tomato soup. Said he sold out every game no matter how warm the weather got. I believed him.

I'm glad I solved this. At my age it's the little things that mean a lot. I'm passing on a spring training trip this year although the invite to the opening of the new Nats/Astros complex in West Palm Beach was mighty tempting. I'll head over there next year I hope.

And no, I don't know who 'Ray Tisler' is! Look at the scan of the card back to see what I'm talking about. I actually found a guy by that name in a White Pages search who's age would be about right. I was tempted to call him and ask him if he remembers stamping 1958 Topps cards with his name. But I figured that would be kind of awkward.

EDIT:
In a comment Jon points out how young Kaline looks on this card. Assuming it was taken in 1957 he was 22 years old. But he could pass for a high schooler. Kuenn OTOH would be 26. He looks 35. Must be the tobacco chaw.