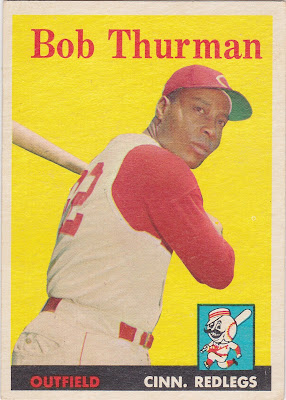 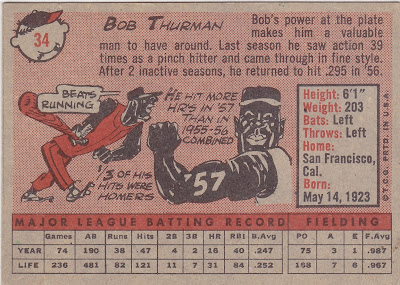 Big Bob Thurman is one of the more interesting players you'll come across in this set. He didn't reach the majors until he was nearly 38 but that doesn't mean he wasn't playing ball. He played amateur and semi-pro ball around Wichita where he was raised and continued playing in the Army during WWII when he was on active duty in the Pacific Theater.

He played in the Negro Leagues after the war and played in the Dominican and Puerto Rico winter leagues. He signed with the Yankees in 1949, spent a few years in their chain as well as the Cubs' system and then signed on with a Dominican League that was outside the authority of organized ball. He did that because the money was better than he would have gotten playing in the minors stateside. That is the real meaning of the cryptic "After 2 inactive seasons..." blurb on the back of the card.

Thurman finally debuted with the Reds in 1955 and carved out a career as a lefty stick off the bench. During his five years (some partial) with the Reds, he became a mentor and unofficial traveling secretary to the team's young black players.  He retired after a minor league stretch in the early 60s.

After his playing days, he became a scout for several clubs, played a lot of golf and working in marketing in Witchita. His SABR bio is long but it's a great read. Thurman's card is another example of one that opens a door to learning much more about the game's history.
Posted by Commishbob at 6:04 PM