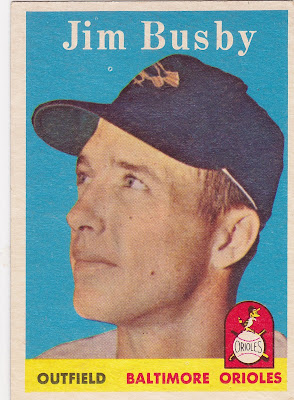 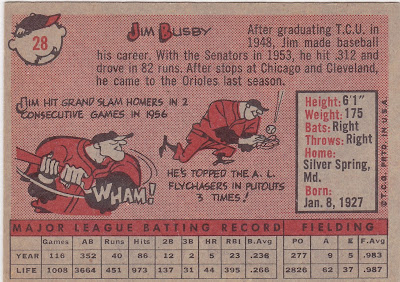 After excelling in football and baseball at TCU and (in the service) Jim Busby enjoyed a three-year climb thru the White Sox chain and then a 13-year career as a speedy, defensive-minded outfielder for five clubs.

He did two tours with both the Orioles and White Sox and played for the Indians, Senators, and Red Sox in the AL. He ended his career with a quick look in Houston in 1962. Along the way, he consistently ranks in the top ten in several fielding categories.

Online bios mention his lack of hitting prowess but his .262 career average is not to be ignored. He had a couple of 80 RBI seasons and flashed a bit of power although in his time the big-hitting outfielders got the glory. In his one All-Star appearance, he took over in left field for Ted Williams late in the 1954 game. He was on deck with some runners on base when George Kell fanned to end the game and any chance for Busby to bat.

Posted by Commishbob at 1:13 AM