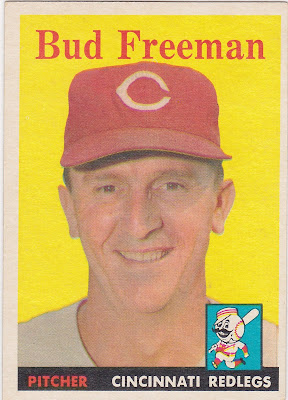 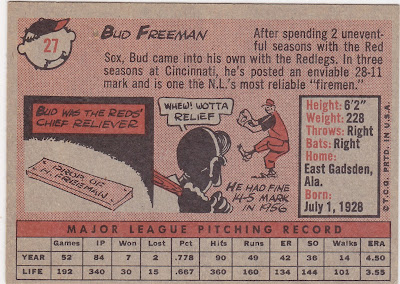 Bud Freeman pitched in the Red Sox system for seven seasons and got a few looks in Boston along the way. In 1955 he was sold to the Reds and he became their 'stopper' in an era that relievers toiled under the radar for the most part.

In four years in Cincy, he went 28-11 with 36 saves. His best year was 1956 when his 17 saves were second in the league. Of course, back then saves were not an official stat and it's unlikely anyone noticed his standing. On the other hand, he did get a few MVP votes that year. Worth noting is the fact that he 'finished' 47 games. The term 'closer' hadn't come into use then but that is essentially when Freeman was. The cartoon uses the term 'fireman' which has since gone out of style.

In the year this card was issued he pitched a few games early for the Reds and was traded to the Cubs in May. He made a few appearances for them with minimal success and was out of the majors in early June. He remained involved in baseball though. He worked for the Reds as a scout and minor league manager. Later he went into teaching, coaching, and counseling in Florida.

This is the only card issued of 'Bud' Freeman. But he is included in several other sets listed with his given name, Hersh Freeman.
Posted by Commishbob at 4:17 PM