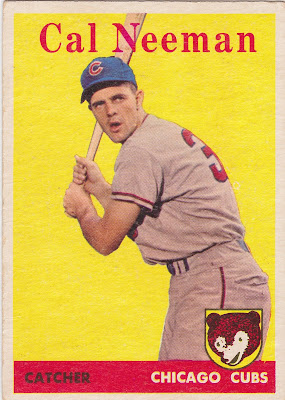 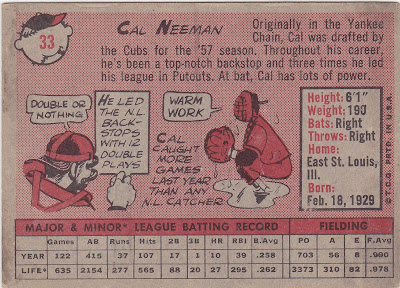 Cal Neeman signed with the Yankees in 1949 and started a long climb thru their system with a two-year military stint along the way. He reached the AAA level but wasn't going to push Yogi Berra or any of the other Yankee catchers aside and was taken by the Cubs in December 1956 in the old Rule 5 Draft.

He made the Cubs roster without much fanfare in 1957 but won the starting job and had a solid rookie year. He was named to The Sporting News' rookie squad after hitting .258 with 10 homers in 122 games. He had a nice season behind the plate as well as he led the NL in several defensive categories. The card even notes that he caught more games than any other NL catcher in that 1957 season.

For a variety of reasons he never approached that amount of playing time again. He played for four different clubs after his three-plus years in Chicago, always serving as a back-up.

After baseball Neeman returned to college and became a teacher and coach. He was later a school supply sales rep. He passed away in 2015 at the age of 86.
Posted by Commishbob at 3:09 PM