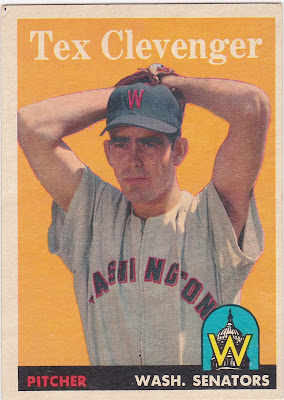 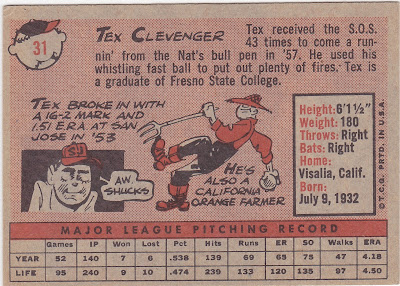 Truman 'Tex' Clevenger was a California kid who broke in with the Red Sox in 1954. He was later traded to the Senators and from 1957 through 1960 was one of the busier pitchers in the AL having finished in the top ten in saves, appearances, and games finished each year.

He was drafted by the expansion Angels but had the good fortune to be traded to the Yankees where he played for two consecutive World Series-winning clubs. Following his career, he sold insurance and owned a Ford dealership.

When blogging his '59 card I found the following anecdote concerning his nickname:

.....found a chapter in this book on Google in which Clevenger himself says he was nicknamed by Red Sox teammate Johnny Pesky who felt Clevenger resembled an old teammate, Tex Hughson. Clevenger goes on to say that players from Texas would ask him what part of the Lone Star State he was from and he drew weird looks when he told them he'd never even been to Texas.
Posted by Commishbob at 10:42 PM