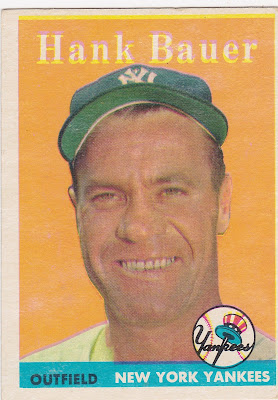 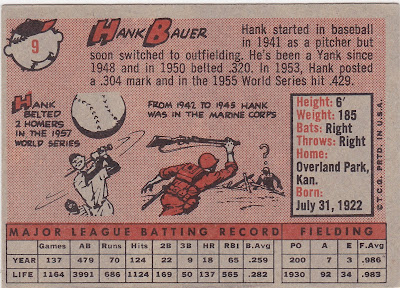 I read a quote at some point that said something along the lines of  "Hank Bauer had a face like a clenched fist."  And it's hard to argue that point. And he had a reputation to go along with it.

EDIT: Pulling up his Wikipedia page and I see that quote there. Unattributed.

And his Wiki page has some great info on this 14-year veteran who was an instrumental part of the Yanks' 50s dynasty. Bauer won seven rings in New York before he played out his on-field days in Kansas City. Check out this excerpt::

Born in East St. Louis, Illinois as the youngest of nine children, Bauer was the son of an Austrian immigrant, a bartender who had earlier lost his leg in an aluminum mill. With little money coming into the home, Bauer was forced to wear clothes made out of old feed sacks, helping shape his hard-nosed approach to life. (It was said that his care-worn face "looked like a clenched fist".)


While playing baseball and basketball at East St. Louis Central Catholic High School, Bauer suffered permanent damage to his nose, which was caused by an errant elbow from an opponent. Upon graduation in 1941, he was repairing furnaces in a beer-bottling plant when his brother Herman, a minor league player in the Chicago White Sox system, was able to get him a tryout that resulted in a contract with Oshkosh of the Class D Wisconsin State League.

Of course, I'm a Bauer fan thanks to his days as the manager of the Orioles and the 1966 Series title he led them to.

There are not a lot of cartoon references to military service among Topps late 50s sets. But there were still plenty of guys active that had served in WWII and especially in Korea. Bauer's days as a Marine were much discussed so it's not a surprise to see them depicted on the back of his card. I like the orange background in the 58s. The Yanks and Senators got the majority of them. The Athletics had a handful as well. It's been quite a while since I did my post tracking the colors used in this set. You can check it by clicking here.