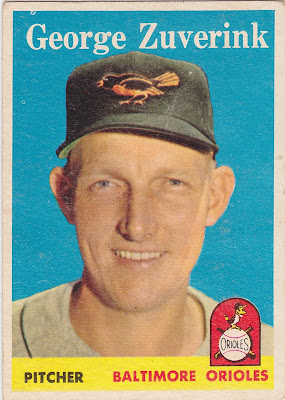 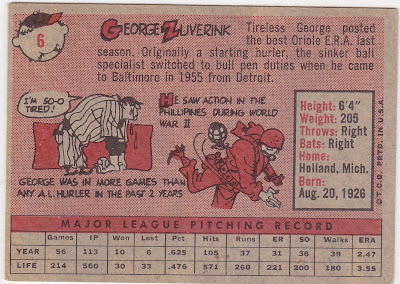 George Zuverink was signed by the Cardinals in 1946 but debuted with Cleveland in 1951 after three strong seasons in their minor league chain. Without much success in a couple of looks with the Indians, he was sold to the Reds for the '54 season but was not there long as the Reds sent him on to the Tigers late in April. He enjoyed pitching for his 'home' club (he was a Michigan native) for about a year before being waived and claimed by the Orioles.

The Orioles put him in their bullpen and he won 23 games with 36 saves over parts of five seasons. He found himself back in the minors in 1960 as the Orioles were on a youth kick. He retired to Arizona after the season and sold insurance for several decades. He died in 2014 at the age of 90.

Two intersting notes from his obituaries...he was a dedicated blood donor throughout his adult life and twice in 1957 he and Orioles catcher Frank Zupo formed the majors only "Double Z" battery.

I've noticed that the name on the back of the card appears to be yet another variation in the set as it looks like the font is not italicized and not bolded. Check these two examples out and see if I'm looking too hard at this.

This is his next to last Topps card as he had one in the 1959 set. He had some certified autographs in modern Heritage sets. My favorite though is his '57 Topps. 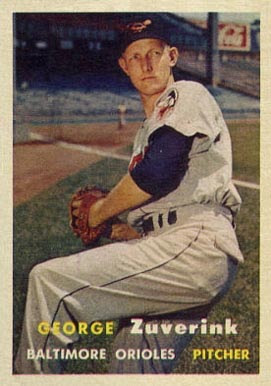