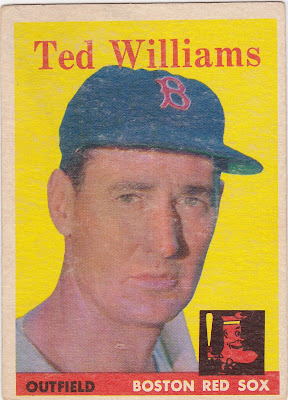 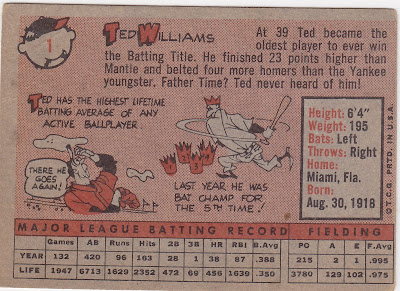 Not much to say about the storied career of Ted Williams, one of baseball's immortals.  If you are interested in his remarkable statistics you can check out his Baseball Reference page. When you're done with that though check out the wonderful 1960 magazine article written for the New Yorker by Pulitzer winner John Updike. It's an account of Ted's final game. It's a free read and definitely worth the time.

As for the card, well let's just say it isn't the worst conditioned in my '58 binder. But it's close. But when you are assembling a vintage set on a budget you have to decide what's an acceptable star card. This is one that came pretty cheaply and also one I might someday upgrade.

It's one of three Williams cards in the 1958 set. He also appears on a special card with Ted Kluszewski and on an All-Star card. These are the final playing era cards of Ted from Topps. He teamed with Fleer in 1959 to produce a set devoted to his life and career. He didn't appear on a Topps card until 1954 and his run with them lasted just five seasons. Of course, he appeared as a manager just over a decade later.

And so Ted Williams kicks off the 'reboot' of this blog. More to come, soon I hope!
Posted by Commishbob at 12:35 AM