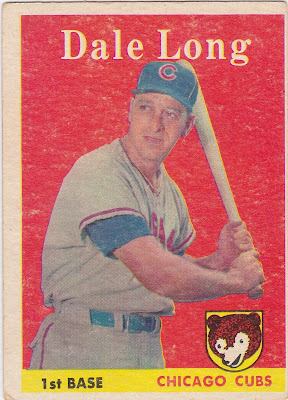 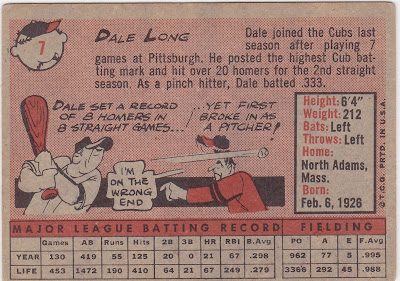 Here's a challenge for someone with time on their hands....make a flowchart depicting lefty first baseman Dale Long's travels through all the baseball organizations he was a part of. Here is his transaction listing from Baseball Reference:
Bottom line is that he played ten seasons for six different clubs and for years was known as the guy who homered in eight consecutive games in May 1956. That record has since been matched by Don Mattingly and Ken Griffey Jr. but never exceeded.

I recall as a kid how that dinger streak impressed the hell out of me and my friends and we coveted Dale Long cards as if he was a star. 1956, in addition to being the year he made headlines for that run of homers as a Pirate, was his best season in the majors. He had 27 home runs and 91 RBIs while hitting .263 and making the NL All-Star Game.

He sandwiched better batting average seasons around that '56 campaign and hit 20 homers or more a total of three times. He appeared in two World Series with the Yankees, 1960 and 1962 when he won a title. Interestingly he was a mid-season pickup by the Yankees in both of those seasons.
Posted by Commishbob at 12:28 PM