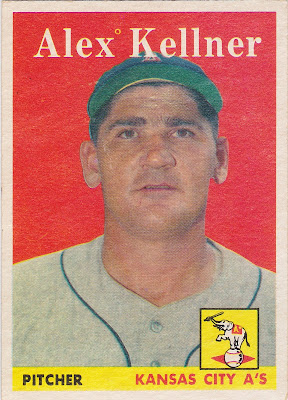 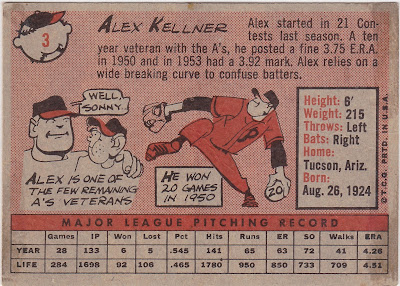 Alex Kellner made a splash in his rookie season of  1949 as a 20 game winner for a Philadelphia Athletics club that won 81 games finishing fifth in the AL. He was voted second in the ROY balloting behind Roy Sievers.

Kellner never could replicate that '49 and actually lost 20 games the next year as the A's crashed to a 52-102 mark the was the end of Connie Mack's long managing tenure. But Kellner persevered for nine seasons in the A's rotation before being waived and then claimed by the Reds in 1958.

He finished up his career in St. Louis in 1959 and won his 100th game there that year. He led the AL in fielding percentage twice and in 1953 had the top mark in Fielding Independent Pitching (whatever the hell that is).

He comes from a baseball family. According to Baseball Reference his younger brother, Walt, was a teammate with the Athletics in 1952 and 1953. His nephew Frank Kellner and father Pop Kellner both played professionally.

This card lacks gloss but has pretty nice corners. The back suffers from the gum/glue stains I see a lot in this set. Back when I first started blogging the '58 set I noted that the player names on the reverse have variations. Some have the first letter in both first and last names in a cartoonish thick red font. Some, like Kellner's, are black. There doesn't appear to be any pattern to this although a quick flip through my binder seems to show that the plainer, black font letters are more prevalent in the first few series.

Compare Kellner's name on the card above to the name on Ted Williams' card:

Posted by Commishbob at 1:27 AM