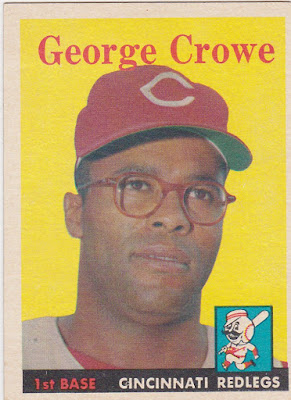 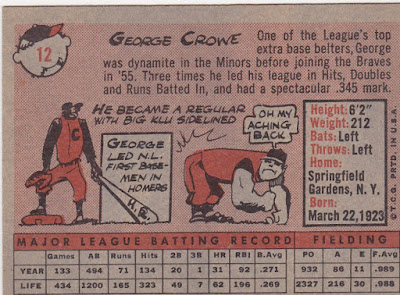 Big George Crowe played all or parts of nine seasons with the Braves, Reds and Cardinals before he retired in 1961. In 1958 he was coming off his one season as a true full time starter. He hit 31 homers in 1957 and had 92 RBI. Both were easily the best totals of his career. He made the NL All Star team in 1958. He had fairly mundane numbers at season's end but was hitting well over .300 on the strength of a red hot first half of the season so the selection was justified.

This is one of numerous uncorrected errors in the '58 set. The card lists Crowe's year of birth as 1923 when it actuality it was 1921. It's also one of several cards that was given 'plain' first letters as part of the name on the back. Check out the difference below. I haven't yet counted how many cards carry each style but the 'plain letter' one is much less frequent. I can find no common denominator among the cards with different lettering.  And I haven't turned up anything about this online. Most of the focus is one the 'yellow letter' variations in the first one hundred or so cards on the checklist.