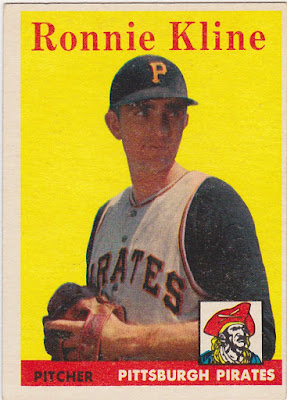 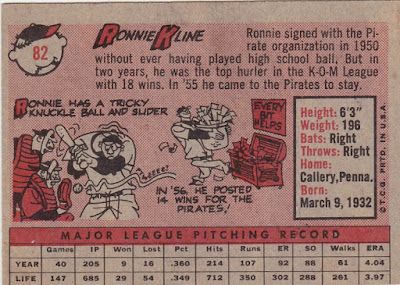 Ron Kline (I never heard him called 'Ronnie') got off to a very inauspicious big league career losing all seven of his decisions for Pittsburgh in his rookie campaign of 1952. He served in the military for a couple of years after that and when he returned to the Pirates he continued to struggle as a starter. He led the NL in losses twice.

It wasn't until he moved to the bullpen that he found success. He moved around quite a bit until settling in as the Senators' closer in the mid-60s and he led the AL with 29 saves in 1965. He pitched a total of 17 seasons with nine different clubs. He retired after pitching briefly for the Braves and in the PCL in Hawaii in 1970. He ranks fifth on the list of pitchers with the most appearances without a postseason game.

He was 13-16 in 1958 but his stats look better than his W/L would indicate. The Pirates finished 2nd that season. During much the 50's the Pirates pitchers wore batting helmets while on the mound as mandated by owner Branch Rickey. This is the first card I've posted from this set that shows a pitcher wearing one other than the Vern Law card in the header. This article gives a lot of the background.
Posted by Commishbob at 1:50 PM