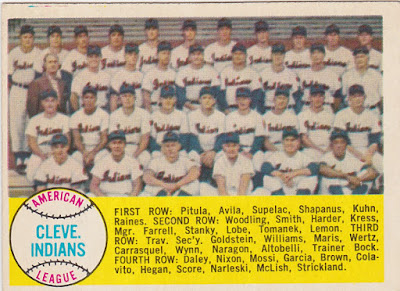 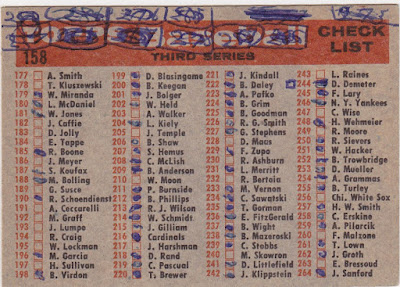 The 1958 Cleveland Indians finished 4th in the AL with a 77-76 record. They were managed by Bobby Bragan for the first half of the year before he was replaced by Joe Gordon. Rocky Colavito led the club in homers (41) and RBI (113) while Vic Power topped the club with a .317 batting average. Cal McLish, Ray Narleski, Gary Bell and Mudcat Grant formed the rotation with Don Mossi and Hoyt Wilhelm fronting the bullpen.

The card shows the '57 Indians team with Kerby Farrell at the helm. I have a slight obsession with team photos. I keep a magnifying glass on my desk and enjoy spotting familiar faces on team cards. The '58 set is one that lists the players on the front which kind of takes the fun out of it. But it's still nice to see rookie Roger Maris on this one. The '57 set had much better team cards IMO. The had team stats on the back and also listed the players pictured.

The card is in decent shape..until you turn it over. A former owner extended the checklist with a pen. I have this on  'upgrade...someday' status.
Posted by Commishbob at 11:14 AM