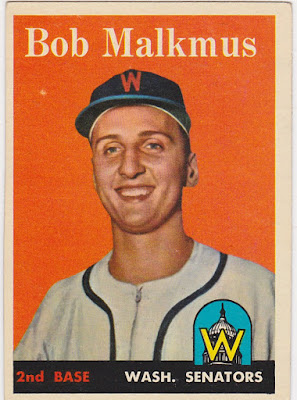 Bobby Malkmus made a long slow climb thru the Braves' organization and was given a shot at being their starting second baseman in June of 1957. He couldn't hit much and the Braves turned to Red Schoendienst who they picked up in a mid-season trade with the Giants. The Braves went on to the World Series while Malkmus went on to Washington via the Rule V draft that December.

He played sparingly in 1958 for the Nats hitting .186 over 74 at bats. After spending most of the following season in the minors the Nats gave him up to the Phils via the draft and he finished his career with Philadelphia. He had his most productive big league season in 1961 when he managed to get into over a hundred games in a utility role and was picked on one writer's MVP ballot (he finished 22nd with one vote) by hitting .231 with seven homers.

Topps repainted the photo used with this card to show a Braves-clad Malkmus in a Washington uni. The card is off center but overall very nice. It was a replacement for the original card that came in my large lot purchase. 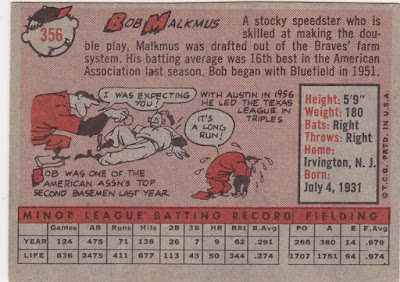 WikiFacts: On September 16, 1960, 39-year-old former teammate Warren Spahn threw the first no-hitter of his illustrious career against the Phils, striking out 15. He struck out every player in the starting lineup except Malkmus.

Non-WikiFact: Malkmus was a product of Newark N.J.'s South Side High School and played football and baseball there. I'm from nearby Nutley and NSS was one of my home town's football rivals. He was before my time though.

Below is my original Malkmus card. The new one is a 101% upgrade. It was a no-brainer upgrade. I don't mind well loved cards but I do have (some) standards. 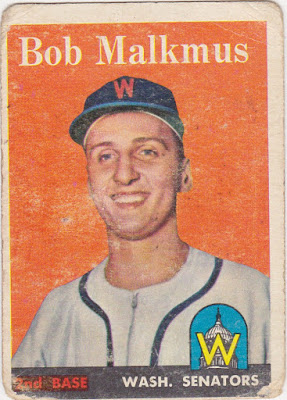