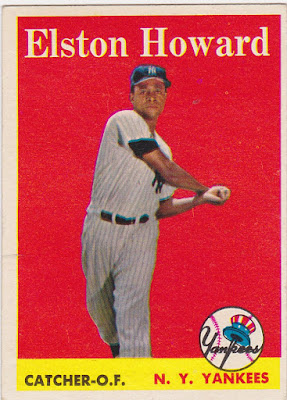 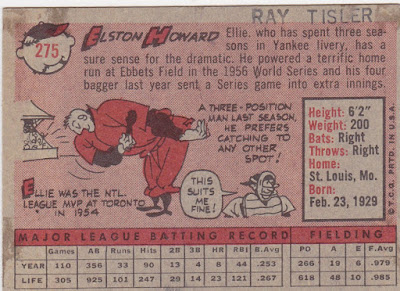 A native of St. Louis, Elston Howard played for three seasons onder Buck O'Neil with the Kansas City Monarchs before he was signed by the Yankees in 1953.

Howard played in ten World Series, nine with the Yankees and one with the Impossible Dream Red Sox in 1967. He won four rings as a player and a couple more as a Yankees coach and front office member. He was a nine-time All Star and won two Gold Gloves.

He passed away as a result of heart disease in 1980. He was only 51 years old. Wikipedia has this to add, something I'd never heard before:


"Howard is ... credited with being the first to use the extended index and pinky finger (corna) to indicate that there were two out in the inning, this being more visible to teammates in the outfield than the usual "two" gesture of the index and middle fingers."

My 'set copy' of this card was once in the possession of one Ray Tisler. I have a bunch that he stamped with his name. They all came as part of a group I bought from a dealer at a hotel show. My other copy, in my Howard PC is a little rougher.

I really like the back of this one. Topps used the word 'livery' in the blurb which is kind of quaint. Cool cartoons as well.
Posted by Commishbob at 10:23 AM